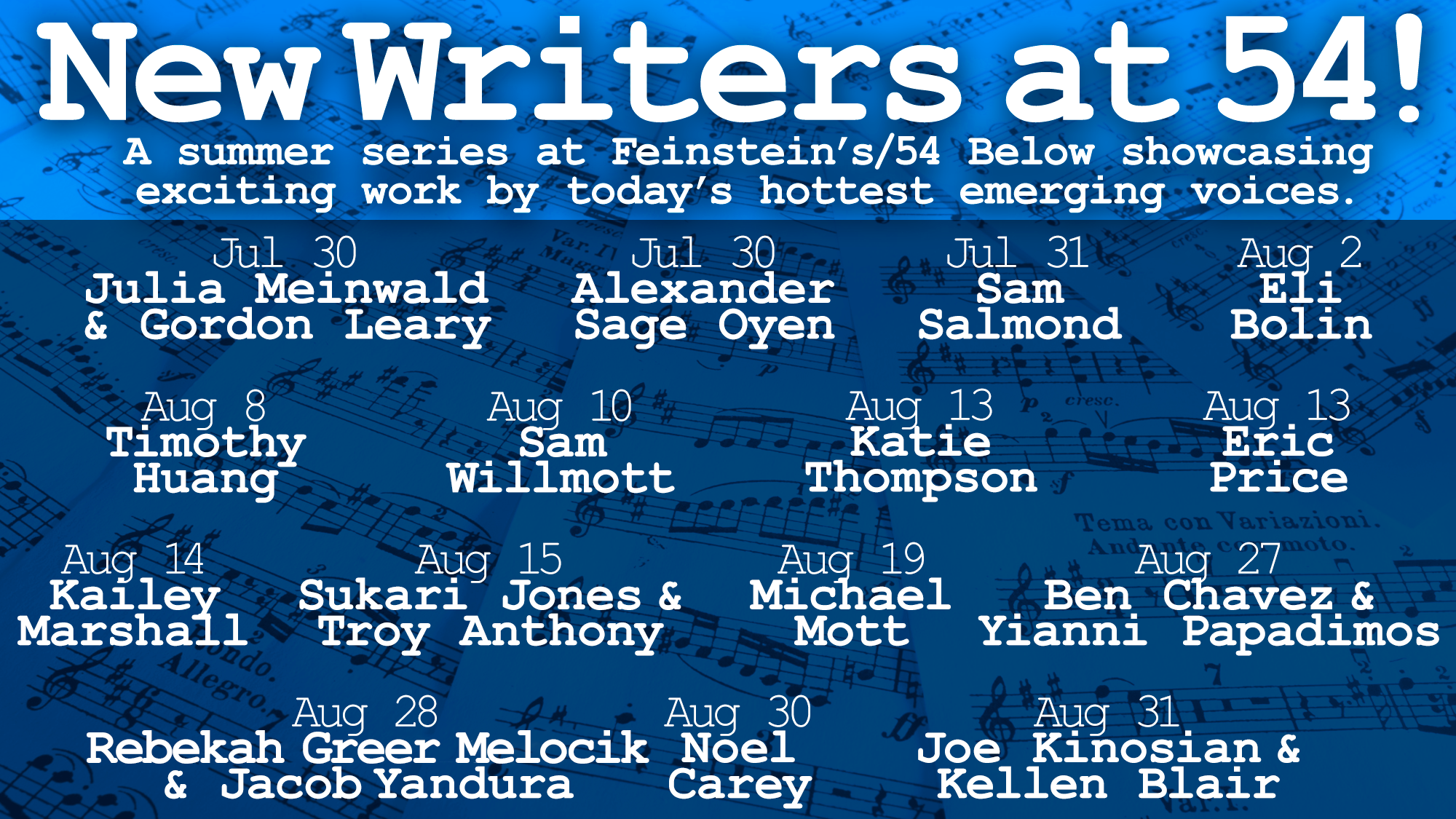 Use code NEW20 when purchasing tickets to three or more shows in the series and receive 20% off tickets in the Main Dining Room or Bar Rail sections.

The Songs of Sam Salmond – July 31 at 7pm
Join Jonathan Larson Award-winning composer-lyricist, Sam Salmond, and some of Broadway’s best performers for a sneak peak of his exciting up and coming musicals! Laugh, cry, and dance your way through stories of LGBT heroes, outcasts, monsters and more!

More Songs by Eli Bolin – August 2 at 9:30pm
Eli Bolin’s songs are equal parts heart-on-their-sleeve and goofy as hell, often at the same time. Eli and his friends return for another romp through his songbook, which will include future standards and old-school favorites. He is a composer and lyricist best known for the off-Broadway hit Found and the NYMF smash Volleygirls, written with Sam Forman. His music has been on television from Sesame Street to Difficult People.

The Songs of Timothy Huang – August 8 at 9:30pm
Timothy Huang, award-winning composer, lyricist, and creator of Costs of Living (2016 Richard Rodgers Award, New American Musical Award) and the one-person musical The View From Here returns to Feinstein’s/54 Below in Some of My Best Friends are White or See, I Write for Non-Asians Too!

The Songs of Sam Willmott – August 10 at 9:30pm
Composer/lyricist Sam Willmott returns to Feinstein’s/54 Below for a totally typical night of Viking chants, intercollegiate competitive Punjabi folk dancing, and, if we’re being real, lots of fantasy creatures.  Winner of the 2015 Kleban Prize, a 2015 Jonathan Larson Grant and the 2012 Fred Ebb Award, Sam and a dazzling cadre of performers will present songs from projects old, new, and never-heard-before-therefore-terrifying-to-share.

The Creations of Katie Thompson – August 13 at 7pm
Katie Thompson (Giant, Big Fish) brings her talented Broadway friends to Feinstein’s/54 Below to sing original songs from her 1st musical R.R.R.E.D. a Secret Musical, her albums “What I’ve Done Right”, “KT LIVE”, and “Private Page”, and many new songs yet unheard.

Ta-Da! The Lyrics of Eric Price – August 13 at 9:30pm
This concert brings together a collection of eclectic, verbally dexterous, and passionate songs from a roster of new musicals by lyricist Eric Price. With shows that musicalize the romance that led to the discovery of radium (Radioactive), the inner workings of a family of stage magicians (Presto Change-o), and the ambitious teenagers who committed online securities fraud in the earliest days of the internet (Hello Out There), audiences can expect to encounter songs that dazzle and surprise, along with stories of collaboration, dream jobs, and real life magic.

The River Is Me by Sukari Jones & Troy Anthony – August 15 at 9:30pm
Sukari Jones and Troy Anthony are an up-and-coming music theatre team. With an original gospel-blues-R&B score, the songs of The River Is Me will be performed in concert at Feinstein’s/54 Below for the first time ever. It will feature fresh and moving music following the ghost of a recently lynched black boy, Bo–a funny chubby 14 year old comic book fan–who must recall and reckon with the last moments of his life, which ended when he was brutally lynched for whistling at a white woman in 1955, in order to save the mother he leaves behind.

In The Light by Michael Mott – August 19 at 7pm
This world premiere concert of Michael Mott’s In The Light features selections from the sweeping, contemporary new musical which captures the tension and passion of the epic Faust legend. Mott is best known for his best selling debut album “Where The Sky Ends,” released by Broadway Records. His original musicals include “In The Light” (book by Nathan Wright and Justin Silvestri),” “The Don” (book by Corey Skaggs) and “Lucifer” (co-lyricist, Mike Squillante, book by Corey Skaggs).

The Songs of Ben Chavez and Yianni Papadimos – August 27 at 9:30pm
Join Ben, Yianni, and all their friends as they try to stop summer from ending with a night of blazing new musical theatre. Chasing Summer will include songs from The Cobalteans (NYMF 2015 Outstanding Music, Lyrics, and Book), never-before-heard selections from their new musical Elysium, and many others.

The Yandura & Melocik Songbook – August 28 at 9:30pm
In every song they write, Jacob Yandura & Rebekah Greer Melocik excavate the shadows of the human heart, combining wickedly dark humor with heart-breaking sincerity. With a diverse and wide-ranging songbook, Yandura & Melocik will take you from a pigeon hunt in rural America (Wringer) to the 1930s rural South (The Last Queen of Canaan) to a populist coup d’etat in a post-apocalyptic future (The Coup, or You and Me, and the Piano).

Opening Numbers By Noel Carey – August 30 at 9:30pm
Join award-winning writer Noel Carey for an evening of opening numbers as he invites the audience into the worlds of 9 brand new musicals. This night features music from an array of shows including Zazou, The Showmen, and Seven Minutes in Heaven, as well as new twists on Shakespeare, Dickens, and many more. Noel’s shows have received development through his years at the BMI Workshop, as well as regional appearances at Barrington Stage and the Finger Lakes Musical Theatre Festival, among others.

The Songs of Joe Kinosian and Kellen Blair – August 31 at 9:30pm
From the acclaimed writers of the hilarious off-Broadway hit Murder For Two comes a well-rehearsed and painstakingly planned evening of songs, patter… and probably some other stuff. Joe Kinosian and Kellen Blair have performed at Lincoln Center, The Kennedy Center, on Broadway at the Theatre World Awards, and in front of as many as three Pulitzer Prize winners, some of whom managed to pay attention for the duration of their set.