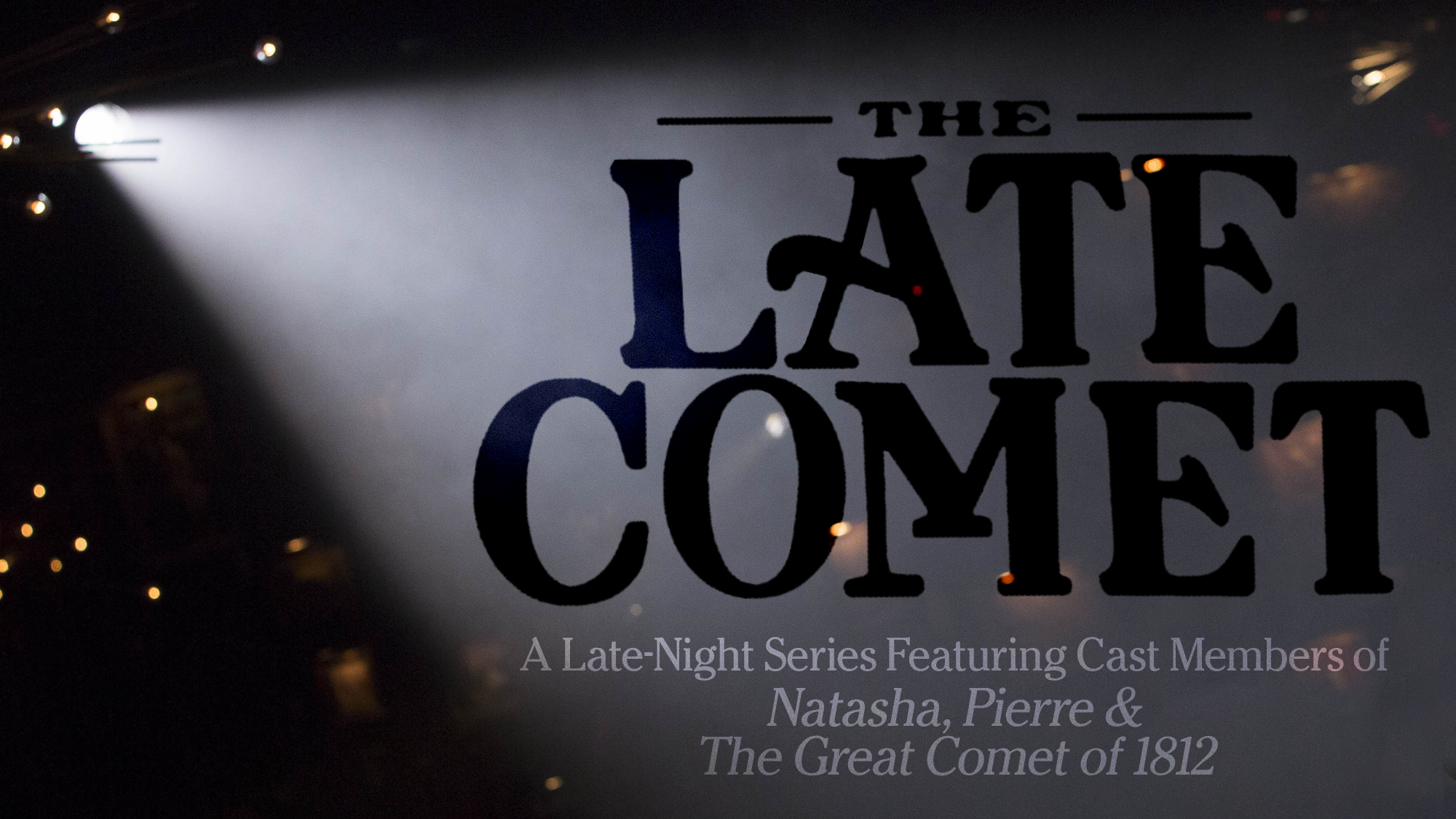 The Late Comet, a series of (mostly) late-night shows featuring cast members of Natasha, Pierre & The Great Comet of 1812. Produced by Philip Romano.

Come on out to Feinstein’s/54 Below to celebrate with Celia Mei Rubin as she celebrates her birthday at midnight by lamenting bitterly but endearingly on her perpetual singledom. She may end up #35andsingle by the end of the night, but it will probably be agreed that she still has the body of a 25 year-old, so let’s be honest: 35 has rarely looked this good, single or not.

Brittain Ashford – September 30 at 9:30pm
Join Natasha, Pierre, & the Great Comet of 1812’s Brittain Ashford in her Feinstein’s/54 Below solo debut! Brittain originated the role of Sonya in The Great Comet at Ars Nova in 2012, and received a Lortel nomination for her performance during the Off-Broadway Kazino run. Brittain has also appeared in Dave Malloy’s Ghost Quartet and fronts her own band, Prairie Empire. Tonight Brittain is proud to present a night of her own music and some favorite covers with some of her favorite New York musicians and special (surprise) guests.

Cathryn Wake & For You The Moon – October 6 at 11:30pm
For You The Moon is an indie pop collaboration between actor/multi-instrumentalist Cathryn Wake(Natahsa, Pierre & the Great Comet, The Fantasticks) and musician Neil Reynolds (Aeralyn, Ashes of Atrocity) that fuses synths, acoustic instruments, and electronic beats. Wake and Reynolds trade vocals and instruments, welding together a sound sparked by the genre-bending melodrama of Panic! at the Disco, Kimbra’s eclecticism, and CHVRCHES’ unapologetic 80’s cheer. Making their Feinstein’s/54 Below debut, the duo will be joined by fellow cast members of The Great Comet and will be releasing their second EP of five new songs that evening.

Shoba Narayan: SHOBusiness – October 20 at 11:30pm
Shoba Narayan is ready to share her journey into the land of Show Business in her Feinstein/54 Below solo concert, SHOBusiness. The concert will take a look back at melodies and stories associated with her career and life, featuring songs from The Apple Tree, The King and I, Annie Get Your Gun, Side Show, as well as pop covers and compositions by 3-time Tony Nominee Dave Malloy.

Sumayya Ali – October 21 at 11:30pm
The versatile American Broadway actress, opera singer, composer, and violinist will lead you into her kaleidoscopic world, where you will experience a taste of musical theatre, jazz, pop, opera fusion, and some of her original compositions from her upcoming album. She will be joined by some of her Broadway friends.

Pearl Rhein: Books & Instruments – November 11 at 11:30pm
Actor, singer-songwriter, and multi-instrumentalist Pearl Rhein makes her Feinstein’s/54 Below solo debut with an evening of original songs. Pearl writes songs for musical theatre and solo performance on various instruments, and has long been a member of The Bushwick Book Club, a songwriters’ group that presents new songs based on books. Come enjoy an evening of new music featuring exciting guests, including several original cast members of The Great Comet!

Azudi Onyejekwe – December 1 at 11:30pm
Join singer-songwriter and multi-instrumentalist Azudi Onyejekwe (Broadway’s The Great Comet and Violet) and his band for an intimate night of R&B, soul and pop. The night will include selections from his in-progress currently untitled EP among other originals, ranging the gamut from urban political anthems, to 80’s era inspired pop/R&B, to pure stripped down acoustic soul.

Courtney Bassett and Starbird & The Phoenix – December 8 at 11:30pm
Join The Great Comet‘s Courtney Bassett along with her band, Starbird and the Phoenix, for an evening of jazz, soul, folk pop, and 90’s childhood nostalgia. Starbird and the Phoenix is an indie pop collaboration between Courtney and ukulele genius/male rock soprano, Andrew Swackhamer. Come taste some melodic-harmonic ear candy laced with yummy special guests.

Lulu Fall with Kris Johnson – December 29 at 11:30pm
Join award-winning singer-songwriter Lulu Fall and award-winning trumpeter Kris Johnson as they perform selections from their new project, The Unpaved Road, as well as other popular covers. Spearheading social stigma and stereotypes combined with unique textures of sound fused with jazz, soul, world-groove, and classical elements, Kris and Lulu join forces for an evening of global perspective and musical diversity. A creatively well-rounded and dynamic duo, their music will engulf you and journey you through their young Black American experience.